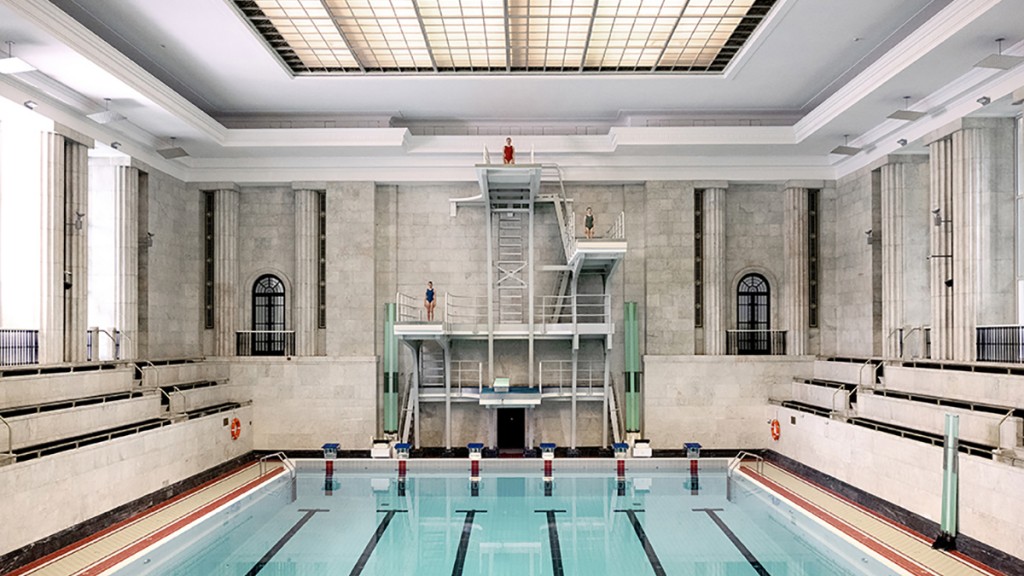 The Gift is a 20-minute three-channel film which investigates how gifting is embedded within the landscape of Europe’s identity formation, exploring particularly intriguing examples of gifts of architecture, art, music and dance through the use of allegory and narrative. The film addresses the concept of a political gift; a donation of artistic, architectural, political or philosophical thought to national and ideological structures. The project is filmed across paramount examples of architectural donations; Oscar Niemeyer’s French Communist Party Headquarters in Paris (a gift from the architect to PCF), Palais of the Nations in Geneva (composed from gifts by the international community), Museum of 25th of May Belgrade (a gift to Tito from the nation), and Mount Buzludzha Bulgaria (a gift from the nation). The film investigates culture’s role as a political style-bearer and a Trojan horse for covert diplomacy and political interest.

The script for the film is drawn from archival traces on discussions about soft power and cultural diplomacy that led to some of the most iconic architectural and artistic manifestations of political gifting within European space. The storyline follows three men – the Gifts of Art, Music and Architecture – as they participate in the final round of a competition that seeks the perfect gift for a divided nation; a gift that must be both aesthetically impressive and politically adequate. The competition takes place within a perfect setting for the spectacular competition: an open and transparent assembly hall that appears to break with the burden of antiquated political style, cutting away from the past and propelling itself into the future. Filmed in the French Communist Party’s headquarters in Paris, itself a gift of the architect Oscar Niemeyer. Within this set-up the Gifts are judged and scrutinized by allegories of Four Fundamental Freedoms who drive the discussion into its very own destruction: a collapse of the symbolic tie between state and culture, a reminder of past ideals and their collapse in the rise of populism.

The Gift is a long form research, exhibition and film project, which Cibic will be developing across various institutional platforms during 2019-2021. The project has begun in 2019 with the first chapter of the project presented at Steirischer Herbst ’19, Graz.

The Gift addresses the concept of a political gift; a donation of artistic, architectural, political or philosophical thought to (trans)national and ideological structures. The film will investigate how gifting is embedded within the landscape of Europe’s identity formation, exploring particularly intriguing examples of gifts of architecture, art, music and dance using allegory and narrative. The project will be filmed across paramount examples of architectural donations to the idea of a modern international community. In this way, it will investigate culture’s role as a political style-bearer and a Trojan horse for covert diplomacy and political interest. The final effect creates a turn in reality: the film uses the manifestation of political action as decoration to art rather than the other way around. Ultimately, the film will raise the following question: how are we, creative producers and artists, complicit in the creation of the spectacle of political power?

In Jasmina Cibic’s films, architecture always acquires an agency of its own, as it frames, stages, and organizes human actions into carefully choreographed performances – decoding and ascribing spaces of political power. One cannot help but wonder exactly who or what is the main protagonist in the artist’s films: Is it the buildings, their users, or the concepts? Or is it actually their ritualistic relationships? How Cibic deploys architecture through the medium of film is a poignant reminder of the century-long relationship between modern architecture and the mass media, a relationship without which, as Beatriz Colomina would argue, modern architecture would not exist at all.

The Gift goes even further in finding a common entanglement of architecture with the concept of political authority via mass media and staging; it carefully selects – as its central protagonists and filming locations – buildings, which served as theatrical devices for ultimate political power. Erected during seminal moments of identity crises of European ideological beliefs in the 20thCentury, the architectures The Gift features, however, are not products of commissions pointing to soft power mechanisms of (trans)national politics, but gifts to the authoritarian structures by various subjects aligning themselves with these very same belief systems (nations, citizens, international community). As the anthropologist Marcel Mauss writes: for the gift economy to fully function, the gift must continue to circulate. When the gifts are fixed architectural stages, ascribing political action, it seems the only way they may continue this circulation is through the discourse they produce. It is within this frisson that Cibic’s film connects various historical and even ideologically contrived buildings and their inhabitants (political parties, unions, heads of state) for their common entanglement with the economy of gifting and the unwritten contract of the return of a retribution gift (to the nation, citizens and/or the international community).

The Gift presents a unique inquiry into how art and architecture have been perceived and utilised not only as pawns in permutations of soft power strategies, but also how they themselves are implicit, through the economy of gifting, in the production of the spectre of ideology. As the beliefs to whom these gifts were made crumble, these architectures – now freed from the obligation of continued circulation – may be used from the vantage point of global contemporary to speak of new reactivated political agencies and perhaps suggest a different moment of political and aesthetic possibility.