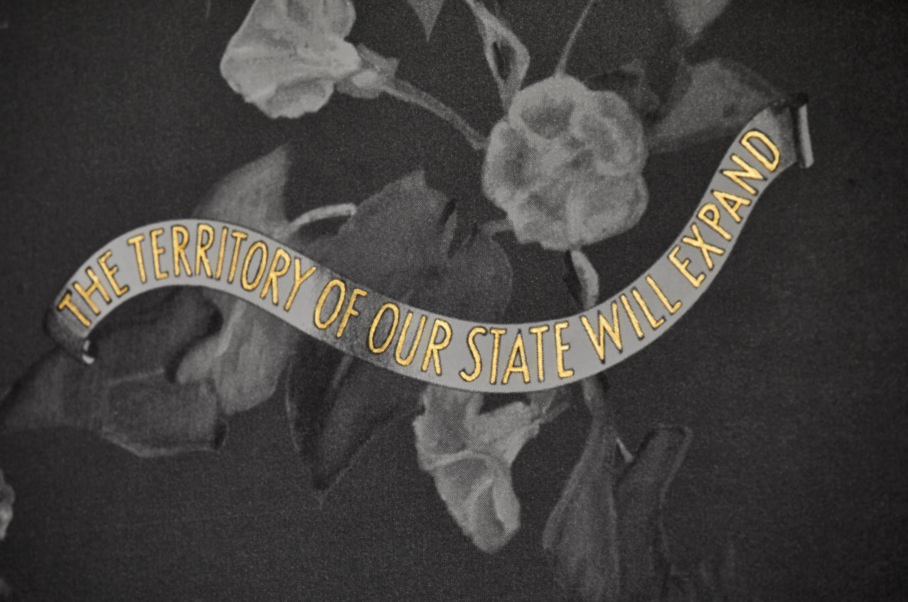 Jasmina Cibic’s extensive multi-media installation represents the culmination of her ambitious project for Aarhus 2017, presenting a new video commission and performance alongside recent work. The effect is to create a complex narrative around the practices of nation building and soft power that is simultaneously intricate and diffuse, critical and implicit.

The exhibition includes her most recent film, Nada Act II, alongside the first part of the eventual trilogy; Tear Down and Rebuild; The Nation Loves It; Double Game and The Pavilion. These works span five years of production, and taken together form part of a greater ongoing exploration. Cibic shot Nada: Act II in Arne Jacobsen’s Aarhus City Hall. She uses this suitably gesamt architectural structure as a stage par excellence; a cinematographic device within which she places a recreation of the performance of Bela Bartok’s pantomime ballet The Miraculous Mandarin at the 1958 Brussels EXPO. It was this work that the Yugoslav Republic chose to represent its new direction on Nations Day almost sixty years ago. Here is it repurposed, mis-imagined and overwritten with new purpose in collaboration with the choreographer Lea Anderson. Bartok’s original characters – the pimps, prostitute and exotic Mandarin – are here replaced with the archetypes of politicians, the ideal of Mother Nation, and that most easily abused of Modern practitioners: the architect.

Gathering together these symbols and iconographies, Cibic’s projects present a synthesis of gesture, stagecraft and re-enactment. Instantiated in films and installations, hers is also an ongoing performative practice, an ‘enacted’ exercise in the dissection of statecraft. Her multilayered approach draws together primary sources and falsified narratives. This willful overwriting creates shifting meanings and highlights historical uncertainties and untruths, especially in the gendering of the past. Cibic plays a double-game, at once decoding mechanisms of power whilst building her own exemplary allegorical structures. Hers is a practice that addresses the ways in which visual language, art, architecture, and rhetoric are deployed and instrumentalised by political regimes, before investigating what happens to these fragments when the ideologies they endorse collapse.

Aarhus 2017 represents an ideal context for Cibic’s double-game to play out. Whilst her references to the Modernist movement and its relationship to various ideological structures appears historical, it also functions as a codex. Its legibility in hindsight allows for its transposition onto more ambiguous contemporary instances of the mobilization of culture for politico-economic ends. The European Capital of Culture program represents both a concerted attempt to bring a festival of culture to a city perhaps not previously recognized for it, whilst also an invitation to commercial development. Nothing is as effective as legitimized culture at sowing the seeds of urban regeneration. What are we to make of art placed in such a service to the state, and what can we learn from the history’s more sinister accounts of this most awkward relationship? That is one among many questions Cibic’s work raises through its tireless and variegated archaeologies.

‘O’ Space is a new gallery for contemporary art and film, created for Aarhus 2017. During the Capital of Culture year the gallery will present a number of prominent international and local. It is located in the heart of Aarhus, on the old industrial port. ‘O’ Space and its exhibition program are to be realized with the support of the Obel Family Foundation, June 15 Foundation, Kvadrat, Ege, Olav de Linde and Panasonic.