Installation view: exhibition The Object of the Spectacle, Škuc Gallery, 2011

Falcon Hoods are a series of sculptures appropriating actual objects that are used to hood birds of prey whilst they are resting on perches in between flights. Cibic uses the falcon hood with its intricate process of manufacture as an attribute of the animal it serves, thus becoming an art object which posits the hunting bird as a luxury commodity that also has the ascribed ability to trigger experience (the hunt).

The artist personalizes the individual hoods with paintings of variations of man-made perches – 20th century artist and designer stools and tables that have entered museum collections and have as such been elevated to the status of an artwork itself.

There are various reasons for which a certain object is included within a collection. The latter is a space that allows the meeting of the viewer and the object that triggers the internal process of experience. Within the fictitious collection Cibic portrays in her series, the hoods and the art works/perches are both accessible to the viewer in the same way. The possibility of experience is in this case not dependant upon the fact whether the inclusion within the collection was of a personal, critical, market, ideal or political nature. It is not the object itself which allows the experience, but the contextual frame within which it is inserted. The experience is different if the framework of the collection within which the exhibited object is placed in, is different.

The real object on display – the bird of prey – is never physically present; the viewer only ever meets the attributes that describe it. It is only with the physical absence of the object that a sufficient distance is established, which allows an insight into the fetishisation that is in fact the real activator of the set up experience. It is only when Cibic removes the object and closes the door upon experience, when the economics of the subjective, material, political, cultural, artistic and other values which were established by the western society of the 20th century, is unveiled in front of the viewer. It is this economics that is still today subconsciously accepted through the context, which all along marks the apparent directness of the object. 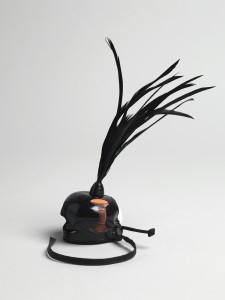